During the weeks of April 2017, the ICTINEU 3 was doing scientific dives in collaboration with the Observatoire Océanologique de Villefranche-sur-Mer, the Laboratoire Géoazur, the Centre National de la Recherche Scientifique (CNRS) and ICTINEU Submarins SL. 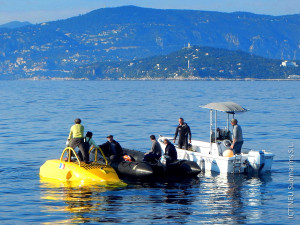 They were 8 days of immersion and 18 dives in which the ICTINEU 3 was 51 hours in the water, 26 of them underwater; 9 biologists and 3 geologists descended on the submersible, exploring the Canyon du Paillon (Canyon of Nice), the Cape of Nice and the bay of Villefranche-sur-Mer, on the French Riviera. 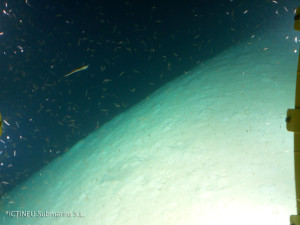 The Canyon of Nice has exceptional characteristics as it is the point of the western Mediterranean whith the most vertical walls. Also, the seabed is very irregular, with many small valleys and very leaned rock walls, and all very different morphologies. Trawling has not been practiced for many decades and the seabed has been able to partly regenerate their habitats. 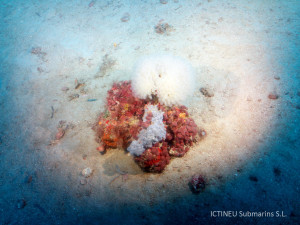 Scientific goals of the campaign:

The Laboratoire Géoazur is a mixed research laboratory specialized in geosciences that combines research on Land, Ocean and Space. Their scientists were interested in studying the Messinian era when the Mediterranean dried up and then quickly filled up again, as well as the -120m zone where sea level was located in the last glacial period and assess the Geological risks of the airport settlement.

The Observatoire Océanologique de Villefranche-sur-Mer is a multidisciplinary center attached to the Pierre et Marie Curie University and the CNRS, recognized as an Observatory of Sciences of the Universe, dedicated to research, teaching, observation and dissemination. It is internationally known for its studies in plankton but also works in the field of pelagic oceanography, fundamental biology as well as in the field of jellyfish. 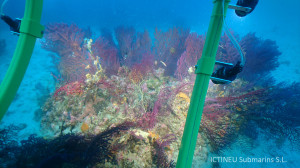 These dives had different interests from the observation of the plankton in the water column to the crepuscular benthic communities, such as the study of coral communities and the relationship with acidification.

On this occasion, a much longer dive than the previous ones was done, a 4 hours and 20 minutes immersion. It started on a 450 meter depth bench and went down into the submarine canyon, sometimes moving over the seabed, and sometimes away from the bottom, through the water column. 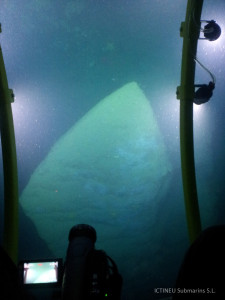 In this dive, in terms of underwater biology it was possible to study and film the different layers of plankton, shoals of fish, very large and dense, the activity of squid or krill. Large deep-sea squids were also filmed hunting in front of the submersible. As for geology and underwater orography, the submarine landform from 450m to 1,000m was studied, and impressive geological formations were discovered, valleys of alpine type at 1,000 meters depth.

These dives were possible thanks to the collaboration of: