In April 2015 the submersible ICTINEU 3 started its first tests and dives to the sea, next to Cap Ferrat. They carried out the training of pilots and scientific dives with the Observatoire Oceanologique de Villefranche-sur-Mer (O.O.V.) researchers. 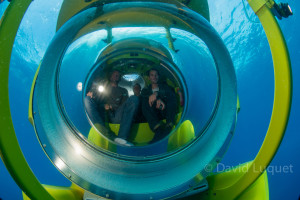 On April 21, 22 and 23, 11 dives were carried out, starting at 18m, continuing at 50m and finally achieving 93 meters deep. These dives were part of the submersible certification plan. Once completed, the navigation permit was obtained in French waters. Thereby, the ICTINEU 3 started its scientific activity at the service of science and humanity.
This important milestone has been possible thanks to the collaboration between the Observatoire Oceanologique de Villefranche-sur-Mer (O.O.V), dependent on the Pierre et Marie Curie University of France, the Chambre de Commerce et d’Industrie Nice Côte d ‘Azur, dealer from the port of Villefranche-Darse, the company DARK PELICAN and ICTINEU Submarins SL.